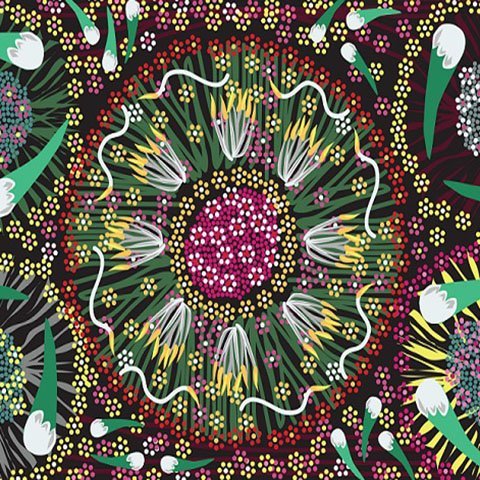 Bush Plum is a small plum like fruit grown abundant in sub-tropical woodlands of the Northern Territory of Australia. The fruits has a high content of vitamin C. It is full of anti-oxidants, folic acid and iron. The flowers are small, creamy white, perfumed and borne along spikes in the leaf axils towards the end of branches. The fruit has a traditional source of bush tucker and healing remedy for the indigenous people of Northern Territory for many years. Aboriginal people have lived in Australia for many thousands of years. One of the secrets to their success was their knowledge of nature and bush food. Bush banana is another commonly used fruit from tucker to medicine. Laurel Tanels is a skillful and bold artist. She depicted both the bush fruits very neatly. Laurels sense of color is excellent. Bush Banana and Plum and Bush Banana are enormously adored by most fabric lovers around the world